The picture below shows the pressure (left) and velocity/streamlines (right) in a section of potential flow (from left to right) around a circular cylinder: 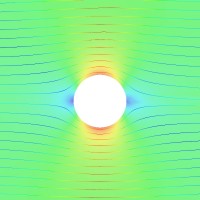 The secret of flight is hidden in answers to the following questions:

-axis in 3d space with coordinates

, assuming the flow velocity is

at infinity in each

-plane, which in polar coordinates

with streamlines being level lines of the conjugate potential function

large, is fully symmetric with zero drag/lift, attaches and separates at the lines of stagnation

in the front and

By Bernoulli’s principle the pressure is given by

and discover an adverse pressure gradient in the back with unstable retarding flow.

Potential flow around a circular cylinder shows exponentially unstable 2d irrotational separation and quasi-stable 2d attachment, and is a useful model for both attachment at the leading edge of a wing and separtion at a rounded trailing edge.