The Paradox of Zero Lift and Drag in Slightly Viscous Flow

D’Alembert’s paradox formulated in 1752 (check out video) states that both drag and lift are zero in potential  flow with the following characteristics:

This is illustrated in the following pictures showing streamlines/speed (left) and pressure (right) in a section of potential flow around a circular cylinder perpendicular to the cylinder axis, with the flow from left to right (or right to left): 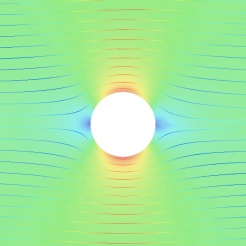 We see a fully symmetric flow pattern with the streamlines closing in behind the cylinder with an equal pressure at attachment at the front and at separation behind, thus a flow with zero drag.

We see equal low pressure on top and below resulting in zero lift.

So, potential flow has zero drag and lift, but in reality a cylinder in slightly viscous flow will have substantial drag and a fluctuating lift.

Potential flow is an approximate solution to the incompressible Navier-Stokes equations at high Reynolds number which cannot be observed in reality. The reason is that potential flow is unstable because of a certain mechanism of instability at separation, which changes the flow into rotational flow with non-zero vorticity which has substantial drag.

This video shows the rotational flow generated from potential flow instability at separation in the flow around a circular cylinder viewing upstream from behind the cylinder.

You can watch the same separation pattern in more the complex setting of a jumbo jet in landing configuration:

To resolve the mystery flight, d’Alembert’s paradox had to be resolved, but nobody was able to come up with a solution. The first serious attempt to solution was made by Ludwig Prandtl in 1904 just after the successful flights by the Wright brothers.

Prandtl’s resolution has become the accepted resolution referred to in the text books of fluid mechanics.

Inspecting Prandtl’s resolution from 1904 we find that Prandtl does not claim to have resolved the paradox, but simply puts forward the suggestion that maybe somehow drag could result from the presence of a very thin boundary layer. Despite its vagueness, this was chosen as the official resolution of d’Alembert’s paradox endorsed by modern fluid dynamicists closely following  in the foot-steps of the father of modern fluid mechanics, Ludwig Prandtl. The credibility of fluid mechanics as a science required a resolution of the paradox: Prandtl delivered one and was elevated to be the father.

But Prandtl’s resolution is not only vaguely formulated, it is completely incorrect: Lift and drag do not result from the presence of thin boundary layers. This is shown in

where the true mechanism of the generation of lift and drag is identified, by mathematics supported by observation. This opened to a resolution of also the mystery of flight.

The essence of the true physical resolution is described in Separation:

to be compared with the non-physical separation of potential flow:

1 thought on “Resolution of D’Alembert’s Paradox”