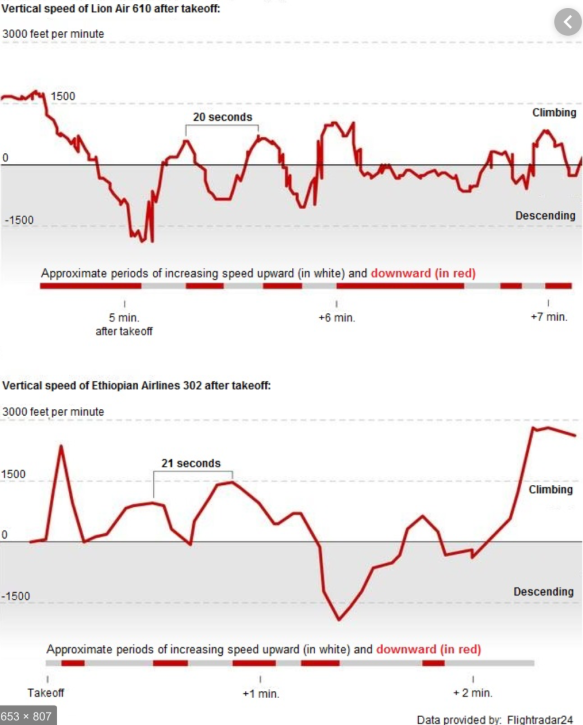 The two fatal crashes of the new Boeing 737 MAX was caused by malfunctioning MCAS software supposed to prevent stall under climb and turn at full engine power by, upon input from an angle of attack sensor, automatically pitching the nose down by activating the stabiliser/rear wing. The pilots struggled to undo the repeated dives triggered by the MCAS,  but were finally overpowered after terrifying deadly roller coaster rides as shown above.

The Max was the result of a hastened design process to meet competition from Airbus in which a classic 737 airframe dating back to the 1960s was equipped with new bigger engines, which had to be mounted further forward and higher on the wings to meet ground clearance.  This showed to give extra lift ahead of the center of gravity and so MCAS was installed to make the Max behave to the pilot just like an old 737.

But the standard CFD software used by Boeing cannot predict stall and so the combined system of MAX + MCAS could not be properly simulated and tested. The result was catastrophic.

The new theory/computation in the form of DFS opens entirely new possibilities of predictive simulation to be used in new flight simulators for pilot training and for certification. These are now being presented to Boeing, FAA and EASA.

Can you blame the crashes on traditional flight theory/computation/simulation being unable to capture the complex aerodynamics of stall?

Here are some posts to browse:

For Boeing to get the grounded Max re-authorised by FAA and up in the air, there is a Moment 22: If MCAS is really needed as a result of a design flaw of Max, then Boeing must show that the design of MCAS + Max is flawless.